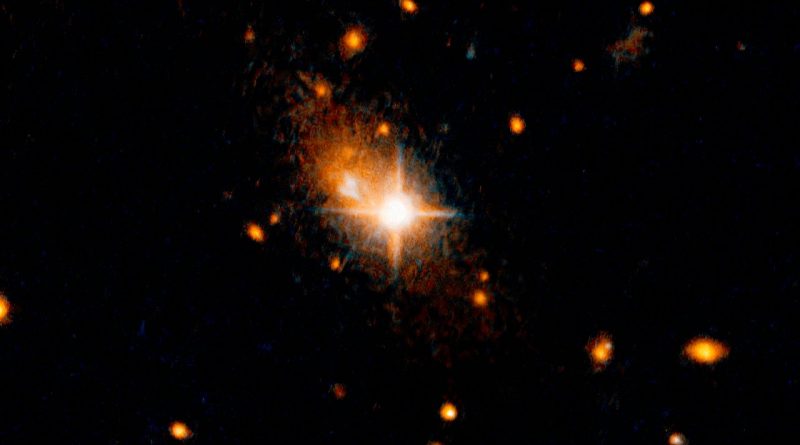 An old proverb says, “the rightful place for a super massive black hole is the center of a galaxy.” Yes, we have cool ancestors. For most of the galaxies that we have observed, we found that there are big fat black holes sitting at their centers [1]. Of course it is impossible to ‘observe’ black holes directly, however by analyzing the quasars around them, we were revealing those nasty ruptures in the fabric of space-time, one by one.

Then, one day Hubble Telescope said, “Guys, is it me or the black hole in that galaxy 8 billion light years away is just hurling out? Can you check just in case? Thanks :)”  Scientists couldn’t believe their eyes when they checked it themselves. A giant black hole equivalent of a billion solar mass was just hurled out of the galaxy and kept going frantically. Then, scientists started to look each other with prying eyes. How could an enormous black hole like that one leave the galaxy center? As expected, they buried themselves into complex calculations and came up with an even crazier fact. It would require an energy equal to a total of a hundred million supernovae explosions just to push it outside of the galaxy with that speed. While they were arguing about the source of that mind blowing energy, they reached to the only possible explanation: “Gravitational waves.”

It is the beginning of the story behind the paper of Marco Chaiberge from Johns Hopkins University. It will be soon published in the Journal of Astronomy & Astrophysics. Now we are rewinding the tape a little bit to have a good look on the most logical scenario for the rogue black hole that the scientists agreed on.

Events start with figure 1. Two galaxies which have giant black holes in their centers start to come closer and merge. Meanwhile, black holes sitting at galaxy centers also get closer and start to revolve around each other. Now think about two school kids who are holding hands and twirling. It is just lake that except school kids are more massive than billions of suns, and they are bending the space-time. Ok, maybe not exactly the same but you got the idea. When we proceed to the figure 2, black holes come closer and closer, and revolve around each other even faster. With this stage, the energy they give off is scattered to space-time as gravitational waves. Actually, they were creating gravitational waves before but those were undetectably small. In figure 3, the hell breaks loose. Two black holes merge into an enormous single black hole, which results in radiation of huge gravitational waves in all directions. You may recall that in the first observation of gravitational waves, the waves were originated from a similar event [2]. So, what happened then?

Now this part is interesting. According to the scenario, the hurled-out black hole is a result of such event. The reason behind the hurling is the serious difference between masses and rotational speeds of two merging black holes. While they were radiating gravitational waves until their last breaths, strengths of emergent waves were not symmetrical in each direction due to mentioned mass-speed differences. When the merging was complete, gravitational waves were ceased to emerge, and out newly born giant black hole was thrown in the opposite direction of the strongest gravitational waves like a rocket. It is not easy to visualize underlying physical mechanisms for this event, but one can think of it as a recoil of a very strong weapon. Like a rookie gun enthusiast who flies back after a not-properly-balanced shot, the black hole is pushed in the opposite direction of the net gravitational wave radiation.

As a result, this misfit black hole goes out of the galaxy with a speed of nearly 7 million km/h while sweeping anything in its way. In a rough estimate, it will be outside of the galaxy in 20 million years and continue to sail along the intergalactic abyss by itself. So there is still plenty of time, there is nothing to fear yet.

Reference for our visuals and text is this paper: https://phys.org/news/2017-03-hubble-supermassive-black-hole-galactic.html